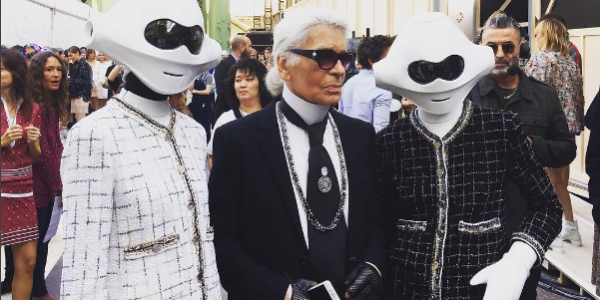 Trans-humanism is both very new and very, very old. Whether the promise of wearing a chip that will immediately report the start of cancer cells in your body or an AI “doctor” diagnosing you from data your handheld collects when you jolt with a pang of sciatica, Trans-humanism recalls the very origin of clothes, the cowrie shells worn about the waist to ward off the “evil eye.”

The problem for Trans-humanism, however, is that the “evil eye” is built into its metaphysics. By this I do not mean the plausible thesis that technology has ends of its own quite distinct from human ones (see work by the insightful Ian Bogost: https://www.theatlantic.com/technology/archive/2017/02/the-singularity-in-the-toilet-stall/517551/) or that robots are bound to come and get us (see the super film, Ex Machina) but rather that Trans-humanism has absorbed a warped metaphysics which knee-caps its soteriological promise. It will not save us from the “evil eye” because Trans-humanism takes its bearings from our decapitation.

Trans-humanist writer Yuval Harari (https://www.wired.com/2017/02/yuval-harari-tech-is-the-new-religion/) interestingly argues that Trans-humanism is birthing two new religions, Techno-humanism and Dataism. Techno-humanism aims to make us superhuman by transforming us into cyborgs, reframing our bodies with digital bio-mechanics. In this religion, humans are squarely the gods, our desires and interests furthered by physical enhancement.

The second religion is Dataism and unlike Techno-humanism it unmasks us and puts us firmly in our place. This religion teaches that humans are just the planet’s most sophisticated data processing units but soon to be made redundant by far better ones. This point is ceded once someone lets an algorithm shape his dating life, suspend her capacity to read a map, or become his stylist (https://www.fastcompany.com/3068172/robot-revolution/ai-can-make-us-all-dress-better-so-why-isnt-the-fashion-industry-using-it-m).

We look up to a new god in Dataism: we celebrate ourselves as gods in Techno-humanism.

The curious thing about these new religions is that they trade on a metaphysical peculiarity long identified by Erich Przywara, S. J. (1889-1972). His 1932 Analogia Entis is arguably Catholicism’s most important theoretical contribution of the twentieth century. I discuss the work of the Polish-German Jesuit at V&R Chapter 8 and here (http://www.libertylawsite.org/book-review/all-valid-law-is-analogical/).

Przywara identified the strange fact that Western metaphysics, with one notable exception, unspools around decapitation.

With Plato, metaphysical systems put a stress on the mind or, with Aristotle, on the body. Przywara actually pushes these options further back linking Plato to Parmenides (all is one) and Aristotle to Heraclitus (change is all). It certainly is uncanny the way that Harari sees robotics offering one or other of these options. Dataism thinks of us as a head only and is heir to Plato whilst Techno-humanism seeks to reframe our bodies and is heir to Aristotle.

Yet, this is not a surprise. These two transformational options have been a long time coming. You can line thinkers up along these two Greek trajectories: mentalist thinkers include St. Augustine, Descartes, Berkeley, and Husserl; naturalists include St. Thomas Aquinas, Hume, Darwin, and Heidegger.

But what exactly is bad about decapitation? What is the loss in being a headless body or a head without a body?

At one time, an obvious and adequate answer needing no defence would have been: the loss is our humanity. What this answer assumes is that being whole – an ordered unity of head and body – is aspirational. Our moral tradition assumes it: reason and the passions need alignment. Trans-humanism precisely puts in question whether this is right, wondering whether there is any great loss without the whole. As tech writers point out, we are already, and seemingly happily, siding with one or other of these new faiths, rapidly embracing our partibility, as whim takes us.

Is decapitation a problem to be solved? Decapitation certainly sounds bad but philosophers have been misled by appearances before. Przywara argues that the reasons to be concerned are at once metaphysical, epistemological, political, and civilizational.

The twentieth century was witness to frenzied political movements that gleefully embraced the Heraclitean world of bodily energy in constant movement with awful consequences for politics and civilization (Fascism). Przywara – a first hand witness – was equally concerned with the challenge such a metaphysics poses to the structures of thought itself. The problem with the claim that we are radically embodied and closed in a world of perpetual and unrestrained change is that truth and falsity blend into one another. This means that the fulcrum of thought, the principle of non-contradiction – one cannot affirm of the same thing in the same respect that it is true and not true – is suspended. The problem with being a headless body is that the norms of rationality and argument are overthrown, exposing all to the highest quanta of the will to power.

The metaphysics of Techno-humanism does not make us gods but victims, slaves, or nations needing to draw on all their civilizational reserves to uproot such tyranny.

The twentieth century was also witness to deluded political movements that somberly embraced the Parmenidian world of ideas and ruthlessly broke traditional communities, and entire peoples even, on the wheel of joyless logical systems (Communism). Purporting to love the people, utter cynicism, Przywara argues, was to be expected: if all is one then truth and falsity, being and non-being, are ultimately, and indifferently, the same. The irony could not be greater, for here too, the principle of non-contradiction is suspended. Logical system is evacuated of rationality or practical wisdom and with entirely predictable results: a turn to brutish assertion of power.

The metaphysics of Dataism offers only a cruel god committed to ridding the world of the ludic, festive, and barnacle-like irregularities and compromises that have shaped human communities down through the ages. A metaphysics of the head always boils down to political arrangements that, as Adam Smith warned, seek to move individuals as though pieces on a chessboard.

Przywara argues that Christian theology, though often getting the stress wrong, is wedded to the idea that humans are creatures owing their existence to a beneficent Designer mightier than they. This valorizes the mind but the core of Christianity, the Incarnation, thoroughly affirms the dignity of the body. In confirming that mind and body belong together, the Incarnation clarifies that divine healing perfects human nature, neither removing nor ignoring it. Edmund Burke makes the Incarnation into the political insight that Establishment funnels political passions (body) into the collected intelligence of a community’s historical political leadership (mind).

Intriguingly, Trans-humanism does not dispute that the human being is a “religious animal” (Burke). It promises a purifying deluge but its version of the biblical flood will not deliver a pristine new creation. Neither cyborg armour nor a geometric future can deliver salvation for each rests on human partibility. Przywara ably shows that tyranny will fill the space of Trans-humanism’s confused metaphysics.

All will receive the baptism offered by the new digital religions but to ward off the “evil eye” we’d best also hold fast to the decorous fabric of Burke’s “ancient manners” (https://upload.wikimedia.org/wikipedia/commons/1/19/Johannes_Vermeer,_Allegory_of_the_Catholic_Faith,_The_Metropolitan_Museum_of_Art.jpg).