Gardening and nobility in Tolkien 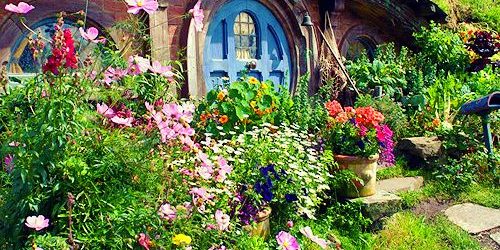 A revised version of this post will appear in September at https://voegelinview.com/

In his Letters, Tolkien often mentions working in his garden.  He was a keen plantsman:

“I am in fact a Hobbit (in all but size).  I like gardens, trees, and unmechanized farmlands; I smoke a pipe, and like good plain food (unrefrigerated), but detest French cooking; I like, and even dare to wear in these dull days, ornamental waistcoats” (The Letters of J. R. R. Tolkien, pp. 288-89).

A paragraph from a 1955 letter takes us to the heart of Tolkien’s moral and political thinking in LOTR:

“There are of course certain things and themes that move me specially.  The inter-relations between the `noble’ and the `simple’ (or common, vulgar) for instance.  The ennoblement of the ignoble I find specially moving.  I am (obviously) much in love with plants and above all trees, and always have been; and I find human maltreatment of them as hard to bear as some find ill-treatment of animals” (Letters, p. 220).

This deeply personal paragraph is also a value thesis: the claim, I suggest, that gardens make us noble.  It is for this reason that Samwise Gamgee, the gardener, is LOTR’s “chief hero,” as Tolkien puts it.  He is a type of hero, a type that corrects the heroics of the Elves in Tolkien’s magnum opus, The Silmarillion.  Lust for the Silmarils – jewels embalming the light of the trees of Valinor – destroys solidarity amongst the Elves.  Tales of remarkable heroism fill the pages of The Silmarillion but the bravery of the Elves cannot repair the ever-renewing fracturing provoked by lust for the jewels.  What is the difference between gardens and jewels?  Unlike the Silmarils, gardens must be tended.  Gardens and gardening make you tenderer.  The gardener armed with hoe and shears is a tough-minded protector, controlling but ultimately obeying the logic of plants, attuning craft to the seeds of life.  Sam is a true knight for he combines toughness with tenderness.[1]  He is a figure not of glory but solidarity, or, to use Tolkien’s preferred term, fellowship.  Gardening is his tutor.

Tolkien makes use of a British tradition dating to Lord Shaftesbury.  In his consequential 1711 Characteristics – a text Carl Schmitt believes basic to Romanticism – Shaftesbury offers gardens as an example symmetry and beauty.  He argues that gardens refine civilization by engaging with number, order, and complexity.  These transcendentals shape and order values, which make an appeal and evoke deference in us.[2]  Adam Smith develops the idea in his famous invisible hand. In his 1759 The Theory of Moral Sentiments he imagines a callow gentleman witlessly deferring to complexity and therewith paying servants to beautify his house and gardens.

Lord Shaftesbury: “there is a power in numbers, harmony, proportion and beauty of every kind, which naturally captivates the heart and raises the imagination to an opinion or conceit of something majestic and divine.”[3]  Like every design object, a garden is a conceit, a story composed of myriad values tones.  An example of a value tone: If I say `peach’ you all now have the taste, smell, and feel of a peach clear to your mind.  We can replicate this value tone in lip balm, fizzy pop, and even gin, once we have distilled it into a chemical formula.  Morals have a similar value standing: if I tell you a story about how I met a benefactor or about a civil chat I had with a man on a train whose conversation suddenly flashed with malice, you all have clear to mind a range of value tones that make these encounters comprehensible.

Elves have a particular sympathy with trees and it is with wood that their craft excels.  Hobbits are plantsmen with a sensibility attuned to the value tones of plants’ colour, texture, movement, space, structure, and scent.

In an important 1951 letter, where Tolkien lays out the key themes of his work for the editor at Collins publishing house, Tolkien explains that his chief hero is Sam, Frodo’s gardener.  In terms of the action of the book, it is Sam who drags Frodo, the Ring-bearer, across the finish line and saves Middle-earth from Lord Sauron’s evil.  About the source of that act, Tolkien writes:

“I think the simple `rustic’ love of Sam and his Rosie (nowhere elaborated) is absolutely essential to the study of his (the chief hero’s) character, and to the theme of the relation of ordinary life (breathing, eating, working, begetting) and quests, sacrifice, causes, and the `longing for Elves,’ and sheer beauty” (Letters, p. 161).

The principals in LOTR all are aristocrats, except Sam, who is an ordinary hobbit.  Gandalf is an angel, Galadriel and Elrond are of ancient lineage, Gimli and Legolas are highborn, Boromir is the son of the Steward of Gondor, Aragon is a king, Bilbo and the rest of the hobbits in the story, except Sam, come from families of Thains.  As the story unfolds, Sam rises in stature, and others fail: the highborn Boromir falls, caught in the madness of desire for the Ring he betrays the Fellowship.  Others, like the hobbits Merry and Pippin, are fools.  Galadriel, though a hero in LOTR, has had to reestablish her standing over many ages, having participated in the primal rebellion against God’s governance, as described in The Silmarillion.  Saruman, another angel, falls, utterly.

Sam grows in stature and does what only two others are known to have done: once holding the Ring, he gives it back freely.  As Frodo starts to fail, slowly destroyed by the lure of the Ring, it is Sam who literally carries him to the fires of Mount Doom so the Ring can be consumed in the flames: at any time then Sam could have taken the Precious as his own.  His service to Frodo and the Shire never falters.

Though there are austere gardens, the English cottage garden is whimsical.  Hobbits are somewhat childlike.  As Shaftesbury points out, all gardening is about geometry and surely ludic, too, and the playful is amplified in the cottage garden.  Sam matches Kolnai’s beautiful lines: “Children, though compelled to obey, are kings because they are enticed away, enchanted, into the fairyland of idealized mankind, into the innocent sphere of pure mathematics, into the abstract and leisurely world of eternal forms.”[4]  Sam lives the ideal of obedience.  He is no mere character for Tolkien, but a marker for a philosophical – and ultimately for Tolkien a theological — anthropology: “A man is both a seed and in some degree also a gardener” (Letters, p. 240).  Obedient to the beautiful, it falls to each of us to tend it and both ennoble and be ennobled.

Sauron and Saruman have no gardens, and, as Tolkien explains, they introduce a false theology, replacing fertility with sterility.  Mordor is akin to a rank lunarscape, a twisted nurseling of Sauron’s resentment, and Isengard begins with a destruction of the forests that is so provoking that the Ents march to war against Saruman.  In LOTR, Elves are all glamour and charm but in The Silmarillion this is very far from the case, much like in The Hobbit.  They also are not gardeners.  Tolkien takes a critical stance towards them:

“[Elves] wanted to have their cake and eat it: to live in the mortal historical Middle-earth because they had become fond of it (and perhaps because they there had the advantages of a superior caste), and so tried to stop its change and history, stop its growth, keep it as a pleasaunce, even largely a desert, where they could be `artists’ – and they were overburdened with sadness and nostalgic regret. In their way the Men of Gondor were similar: a withering people whose only `hallows’ were their tombs” (Letters, 197).

Elves are not destroyers but nor do they tend.  Elves have something of a tree’s aloofness and on account of their detachment leave Middle-earth something like a desert, its potencies left untilled.  They have something of a cavalier quality about them.  By contrast, Sam fusses over Frodo’s gardens and this service prepares him for the greater service to Frodo and to Middle-earth itself.  It would not cross Sam’s mind to embalm the light of the trees of Valinor: not because of a lack of imagination, but his value preference forbids it.

Sam is Tolkien’s moral and political exemplar because gardens relate to place, home, beauty, life, obedience, and service.  Daily tending to a garden is to each day to commit afresh to balance and solidarity.  Gardening links geography and craft, matter and spirit, and thus fertility and nobility.

[1] Tolkien is, of course, an expert on the Middle Ages and confirms Adam Ferguson’s analysis of chivalry: for this analysis, please see my Veneration & Refinement, Chapter 6 (ethicsoffashion.com).