Fabric of the saints

You are here:
Guest bloggerTheory 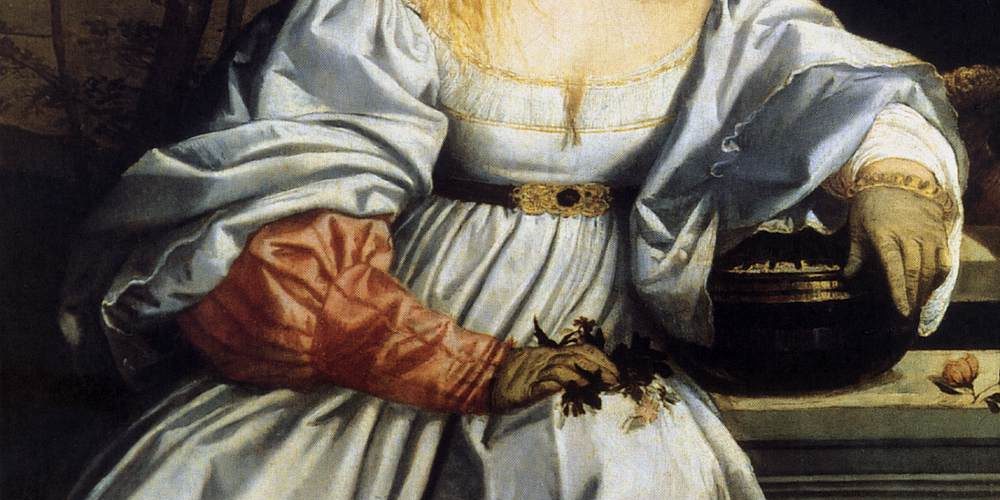 *It is with great delight that I introduce readers to Chris Wojtulewicz.  Chris is a Catholic theologian, living in England and interested in post-modernism.  It’s my hope that Chris will be a regular contributor.  Chris is the author of monographs on medieval mysticism, especially Meister Eckhart, and is currently at work on a book about French theorist Jacques Lacan and the bodily resurrection.  This is an exciting first for V&R.

As with Michelangelo’s David, the proportions of sculpture need not reflect reality. David is a figure set apart from the world; his unnaturally large hands, for example, are simultaneously human hands, and not human hands. Yet there is nothing alienating about this distortion; in fact, it draws us into the human form all the more. David is not clothed. But what can be said of sculpture that depicts clothes?

I restrict my questioning to statuary alone for reasons we will get to in a moment. But first of all I want to point out something about the play on the solidity and movement of the clothes to which the statues give witness, as well as the sense of presence. By all of this I mean to draw our attention to questions of transcendence and immanence by means of clothing.

Many a time I have sat in cathedrals and basilicas across Europe and wondered about the clothing with which the saints are adorned in statues. A figure’s sanctity is manifested either overtly in a heavenward gaze or posture, or else more subtly in a serene, detached, but omniscient peering into the milieu of the people congregated below. Either form captures a moment of ecstatic union with God – we are left in no doubt that the person depicted is not ‘of the world’. But in both cases it is the body itself which is portraying this sanctity. What about the clothes? Do they also share in this communication?

The undulation of the cloth that wraps the bodies of Camillo Rusconi’s four apostles in the St. John Lateran Basilica in Rome is particularly interesting. The cloth has both a rigidity and movement which seemingly cannot be simulated with real clothing. In some measure this is due to the presence that the works of art have as statuary: they are engaged with movement on our part. We do not look at them from just one angle, nor from a collection of angles, but in the almost dialogical structure of our moving around them. In this sense the statue’s clothing comes close to real clothing: they impose a presence on us. That imposing is surely heightened by the larger-than-life size of the figures. But the immutability and immovability of the marble is cut across not only by this sense of presence, but also by their form. The clothes seem to billow, as if animated by some unseen force – a force which somehow resembles wind, but not in any directly identifiable way.

To put this another way, the statues do not have the look of a contemporary photo shoot. It is as though each element of the statue is inherently animated by something invisible – as though directed by a force internal to the object, rather than imposed from without. The result is that the saint’s body and clothes are both still and mid-movement, but not any kind of movement that belongs to this world. The material seems to have the stiffness of a thick linen or heavy silk, but a movement which, at the very least, belongs to something lighter. However one wishes to describe it, one easily observes that cloth does not naturally hang quite like that. Yet the uniqueness or otherworldliness of the form and movement of the clothes does not distract us; in fact, quite the opposite – it seems to belong very much to the coherence of what we are looking at. There is something otherworldly about the clothes, just as the bodily posture, the facial expression, the locks of hair, the muscle definition, or the figure’s size, are otherworldly.

Between the rigidity of marble and the suppleness of the form depicted there emerges a suggestion of transcendence. What makes this especially provocative, however, is that this is achieved by the imposition of presence – both as an unnaturally large physical object, and as a work of art to be ‘navigated’ by moving around it. In other words, saintly statuary conveys the transcendence of sanctity by means of a kind of excessive immanence. The apostles’ clothes are not tailored garments, but masses of gathered material which seem to supernaturally cling to and entwine around their bodies. Their excessive size, their excessive flow, also belongs to a kind of excess of presence. The saints’ clothes are collaborators in the excessive immanence of sanctity.

This brings me to wonder to what extent this is something which can only be skilfully chiselled from a block of marble. Is there any way in which this sense of transcendence and immanence, of otherworldly movement combined with imposing presence, can be achieved (for example) in liturgical clothing? Perhaps the use of certain kinds of heavy cloth, reserved solely for liturgy, would be one way. The stiffness of elaborate needlework, also, may be said to naturally induce this. But does the question of the possibility arise only because we seldom (if ever) have recourse to the ‘excessive’ materials of the past? For a gesture in that direction, look at the enormity of the copes worn by Pope Pius XII (added to by the immensity of his own stature) and the way they moved when worn. A brief window onto the eighteenth century use of material for a cardinal can be seen in the video below. Consider the way the reams of fabric change the way the whole thing moves, and the imposing presence of the figure-distorting excess of material. Are there not at least hints here of the statuary excesses?