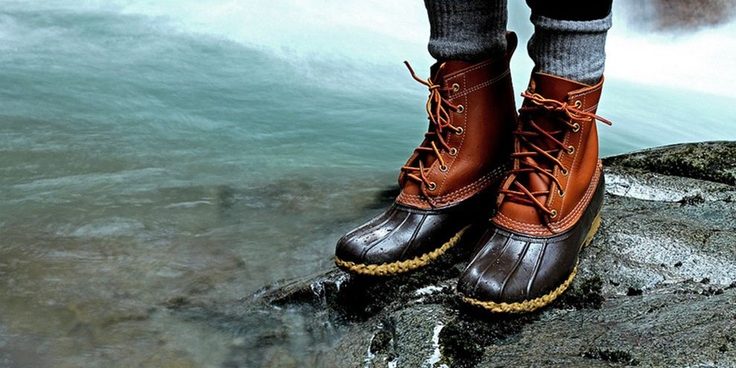 *I would like to thank Jordan Ross for supplying the opening image to this post.  More of Jordan’s work is at: www.jordanrossmedia.com

L.L. Bean is a model of localism (http://www.ethicsoffashion.com/baltimore-and-under-armour/). It is also a challenge to something heard around business schools all the time: businesses must grow!

This supposed imperative is not a moral imperative but economic: companies must grow to survive. Not only is this axiom false – legion is the number of companies that avoid growth – but it is an excuse for narrowing the focus of management just to look to business “essentials.”

American readers have likely experienced calling L.L. Bean to order the iconic duck boot only to be told it is sold out. The boot is often sold out (http://www.theatlantic.com/business/archive/2015/10/llbean-duck-boot-labor-shoes-maine/410863/). Designed for camping, the boot has become fashionable and whilst L.L. Bean tries to meet demand it will not do so at the cost of stability.

L.L. Bean is an exception, however. Not only are duck boots made locally they are sourced in the U.S.A. and mostly locally to boot (sorry :/).  Boots sell for around $120 and yet are hand-stitched in a manner unchanged for years at Brunswick, Maine.

The exodus of shoe manufacturing starting in the `70’s has meant a gradual loss of U.S. know-how in shoe-making. L.L. Bean maintains a training programme but is leery of training the number of people needed to meet current demand. Very like Mittelstand businesses (http://www.ethicsoffashion.com/wool-and-distributist-ethics/), L.L. Bean puts an emphasis on stability: it plans to keep all the workers the company trains. Wary of fashion cycles, this commitment to the stability of the local community means that demand sometimes goes unmeet.

The company advises placing orders as early as possible and then waiting. The boots are worth waiting for, aesthetically and morally.