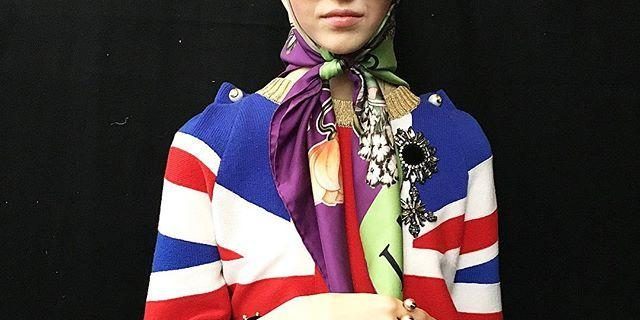 Gucci famously shot itself in the foot with a horrible brand dilution, saturating the market with cheap objects bearing its famous insignia.  Manager director Marco Bizzarri is credited with rebuilding the integrity of the brand and did so in part by a Schelerian gesture: relying on the deep heritage of the company, he promoted from within (and started a trend: http://www.ethicsoffashion.com/returning-max-scheler/).  Bizzarri promoted to head designer the Italian Alessandro Michele whose hyper vivid designs have rejuvenated the label, to put it mildly.

A recent article quotes Michele: “Beauty is like a religion.  You can include everything inside it.”(https://www.washingtonpost.com/lifestyle/style/beyonce-loves-his-work-so-does-melania-meet-the-gucci-designer-trying-to-bridge-a-lot-of-divides/2017/05/11/7c8a4d34-31b2-11e7-9dec-764dc781686f_story.html?utm_term=.334908fa9a65).  It is Michele’s eclecticism — his combination of historical forms and contemporary movements — which is highly valued. Many intellectuals think religion stultifying but clearly Michele disagrees (so too Coco Chanel and Dolce & Gabbana).

The relationship between Christianity and beauty has been both affirmational and problematic.  In traditional theology, the persons of the Holy Trinity dance, the angels sing, and stylized clothes and gestures make up the rituals of the Mass and sacraments.  Aquinas’s preferred image for God is artist, as Przywara points out.  However, disputes about idolatry and vanity have never been far from the surface, as I point out in the Introduction to V&R.

Michele’s claim that beauty includes everything is surely debatable but support exists in St. Augustine.  “God, through whom the universe, even with its sinister part, is perfect.  God, from whom there is no ultimate disharmony, since the better harmonizes with the worse” (circa 386 AD).  And even: What constitutes the true “beauty of the world?”  Augustine answers his own question: “”opposition of one antithesis to another” (circa 426 AD).

Przywara discusses these passages in his Analogia Entis, pp. 515-16.  I have the sense that Michele would be delighted to know that the Doctor of Grace agrees with him.