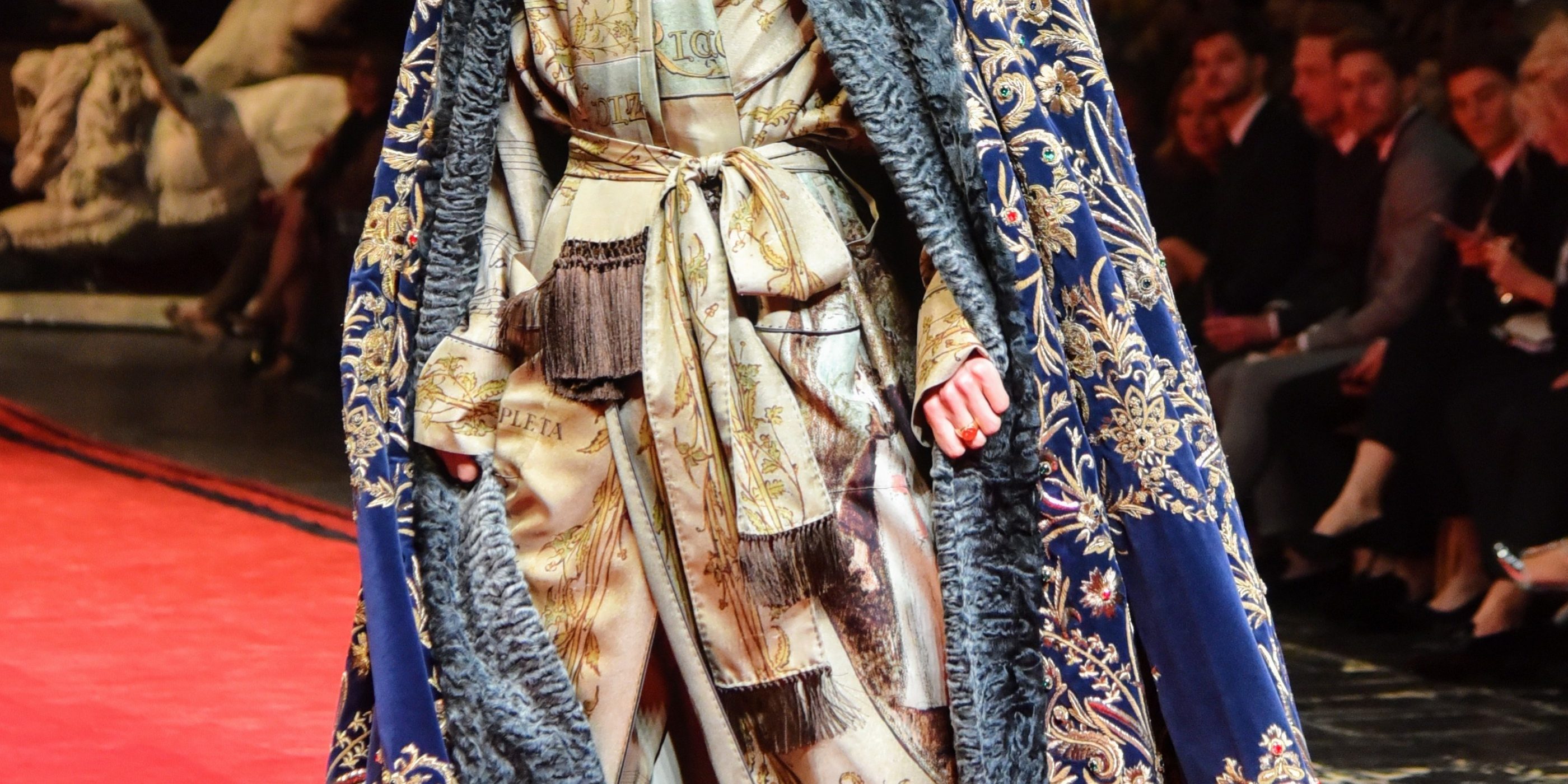 The best line in a recent article on Dolce & Gabbana’s couture business: “After dinner, back at Palermo’s Villa Igiea hotel, which had been reserved for those clients who were not staying on yachts…” (https://www.wsj.com/articles/behind-the-scenes-at-dolce-gabbanas-couture-club-for-top-clients-1506527428: annoyingly, The Wall Street Journal puts articles behind a paywall. Sorry).

Dolce & Gabbana is now exclusively a couture house.  Another example of nation and fashion (http://www.ethicsoffashion.com/fashion-and-nation/), this house is proudly Italian with everything made in Italy, Scheler-like.  It is also not too much to say that it proudly and extravagantly dresses inequality.

Emma Watson’s net worth is estimated at 70 million pounds.  She is not a HNWI = High Net Worth Individual: = 1million dollars in assets excluding primary residence = 17m people globally.

The amazing number to keep in mind: 0.7% of global population owns 41% global wealth.

The world’s population is 7bn and roughly 17m of that number own nearly half of all the world’s wealth.

Who are they? You know a number of them: Emma Watson, Kobe Bryant, Oprah, Mark Zuckerburg, Jennifer Lawrence, Lionel Messi, and Ronaldo.  See Ronaldo’s bespoke Bugatti with his famous CR7 logo: https://www.thesun.co.uk/sport/football/4571102/real-madrid-cristiano-ronaldo-2-15m-cr7-bugatti-chiron/.  For Americans, they are your political masters from both the Left and the Right: Nancy Pelosi, John Kerry, the Bush family, the Clintons, Al Gore, Mitt Romney, President Donald Trump, and Barack Obama just joined the club, too. And, since he is in the news, Harvey Weinstein.

Typically, this is a secretive world: http://www.ethicsoffashion.com/weddings-and-trusts/

Emma Watson prides herself on being liberal and progressive and so was embarrassed when the Panama Papers came out. Panama is a tax haven and the Panama Papers refer to a leak in 2015 of the accounts of a wealth management company.

In the popular imagination, a tax haven is a place where the rich put their money to avoid the taxman.  Tax havens are usually islands (Cook Islands, British Virgin Islands), micro-states (Panama), or principalities (Lichtenstein).

The Panama Papers look like the Leftist Watson not paying into the common good of the UK and not paying her share to support government health care, etc. Confronted by the leak, Watson claimed she has her money there not to avoid tax but for privacy reasons. Now, it is true that a reason the ultra rich use tax shelters is for the sake of privacy. Elite wedding planners tell us that though people like Kanye West and Kim Kardashin sell their wedding to the news papers most UHNWIs do not e.g. LeBron James insisted on absolute secrecy.

Morally, desire for privacy seems unproblematic but what about hiding money from government? Is that moral?  Let’s assume that there are public goods like roads, defence, education, clean air and water and that these common goods require taxation (libertarians or anarcho-capitalists dispute this formulation of things).  Is it moral to opt out?  By opting out the ultra rich keep control of 41% of global assets, and growing, fast.  Is that inequality morally repugnant: Should those assets not be spread throughout a larger segment of the population via taxation?

Tax havens are not obviously immoral.  Please see my post at: http://www.libertylawsite.org/2017/06/30/in-trusts-we-trust/

Currently, Ivanka Trump is taking Japan by storm, her looks and fashion sensibility a source of national fascination (http://www.scmp.com/news/asia/east-asia/article/2065691/japanese-arent-so-sure-about-donald-trump-they-love-ivanka).  At a time when many in the fashion world are anxious to distance themselves from Ivanka, Dolce & Gabbana have thrilled to her wearing their clothes.  Challenged, Gabbana says: “She’s a lady… It doesn’t matter what people think.  I enjoy. I’m happy.  That’s it!”

The moral and political implications of fashion cannot be avoided.  Gabbana’s joyous refusal to be serious is at least refreshing when compared to so many in fashion who lecture us on goodness and themselves trade on inequality.  As I have pointed out in V&R, it’s also true that Dolce & Gabbana’s bespoke business has much less to apologise for than the vast majority of clothiers whose business plans require cheap, off-shore labour and an unrelenting use of new resources.  Another interesting aside in the WSJ article: the observation that guests at the Dolce & Gabbana show/event in Palermo proudly wore last season’s clothes.