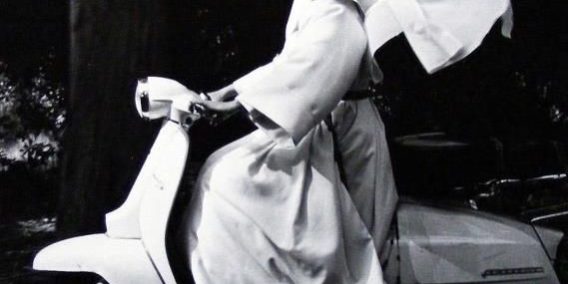 In light of the Met’s 2019 fashion retrospective focusing on the role of camp in fashion, it’s time for V&R to start considering the theme.  This post is the first in a series.

In the classic noir novel, The Big Sleep, private detective Philip Marlow stumbles across a dead man murdered with cyanide:

“It was raining hard again.  I walked into it with the heavy drops slapping my face.  When one of them touched my tongue, I knew that my mouth was open and the ache at the side of my jaws told me it was open wide and strained back, mimicking the rictus of death carved upon the face of Harry Jones” (Raymond Chandler, The Big Sleep [Vintage, 1992], p. 180)

It is the job of intellectuals to wonder what today’s pressing problems are.  There are many candidates: how to make democracy truly representative, while avoiding falling back into fascism or communism; the sacralization of violence and the culture of death; where best to find social cohesion, and whether the sacred is a necessary part of that; and the rise of oligarchy and tremendous inequalities.  Another candidate is camp.

Camp Catholicism is, like Jonah, to enter the belly of the beast.  It is a proposal.

In 1944 the French Jesuit, Henri de Lubac published The Drama of Atheistic Humanism.  Since then, the problem of atheism has intensified and today has a new guise, camp.  What rivals the Church is camp.

Camp is the aesthetics of contemporary atheism, but this aesthetic must not be wholly rejected.  Rather can it help the Church find its bearings once more.

Put differently, camp is a challenge to natural law, the source of moral theology.  At least, this is what its advocates believe.

When writing her brilliant essay on camp in 1964, Sontag identifies two contemporary sources, Jewish moral seriousness and homosexuality.  It is certainly true that in the culture wars of the contemporary United States secular Jews and urban homosexuals are the thought and taste leaders of the establishment Left, whilst Catholic intellectuals and lawyers make up the establishment Right.

Sontag helps us see larger forces are in play than these cultural and political demographics, though they are real enough at election time.  Sontag argues that camp is artifice, a stylization that puts us at a radical distance from nature.

This seems right: the deepest challenge today to moral theology stems from transhumanism and its many offshoots.  In moral theory, progressive academics favour Kantianism and utilitarianism, both of which assume attenuation from nature.  Camp is celebrated – and will be at the Met Gala, I am sure – for being the vanguard of restructuring sexuality, seeing off sex’s moorings in natural order.  Intriguingly, in this light, camp is the aesthetics of disenchantment, contributing to a centuries old project of thinning out nature (https://www.lawliberty.org/book-review/materialist-oh-and-about-modern-sciences-disenchantment-of-the-world-not-so-fast/).

However, all this assumes Sontag is right: that camp leaves nature behind.  I do not think this is right.  Roger Caillois is our guide.

He argues that a basic datum is the unity of nature.  Like Scheler’s idea of universal pantomime, Caillois focuses on mimickry throughout nature.  Rather interestingly, he argues that myth is the expression of the insight that common patterns run up and down nature.  He gives the example of myths about living stones, which Tolkien makes use of, too.

Against the disenchantment that comes with Darwin’s reduction of biology to adaptation, Caillois counters that nature has “motives” “just as pressing on a universal scale, such as profusion, play, ivresse, and even aesthetics, or at least the need for ornament and decoration” (The Edge of Surrealism [Duke, 2003], p. 346).  (The disenchanting use of Darwin is clear enough, but Darwin himself might be closer to Caillois: see my post http://www.ethicsoffashion.com/darwin-and-adornment/).

Caillois dubs this the “natural fantastic.”  He offers the star-nosed mole as an example.  Sontag’s preferred example of camp is art nouveau, but as a type of mythic representation of nature shape-shifting (again a theme found in Tolkien), art nouveau is a good candidate for the natural fantastic.

As I show in Erich Przywara and Post-Modern Natural Law, so is Catholicism and moral theology.  There, I argue that natural law is best explained through play and mimickry.  I will explain this more in Part II.