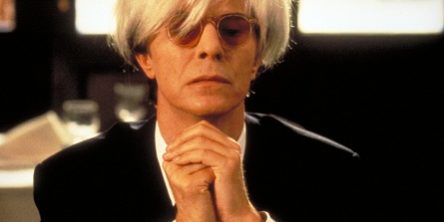 Yesterday Loyola University Maryland hosted the Annual Andy Warhol Lecture sponsored by the Committee on Catholic Social Thought.  I will give a brief summary.

The theme was music and began with the observation that even young toddlers dance on hearing music (for those familiar with this blog know that Huizinga bells were going off in my head).

Professor Michael Krom of St. Vincent’s University, Latrobe, PA, then played a series of music videos and asked students to reflect on how they felt when listening.  Clips ranged from the Bluegrass song “Old Joe Clark” to Bowie to Bach. Student responses registered their desire to dance, work out, and reflect.  This led Dr. Krom to discuss Plato’s theory that music plays an important role in the education of the soul.

Plato argues that there are three parts of the soul: desire, spirit, and reason.  Music can speak to each and this can create moral problems.  Parliament’s 1978 Houston Performance of Flash Light (desire), Danzig’s Mother (spirit), and Bach’s Crab Canon (reason).

The question was raised whether any music could be immoral and unsurprising to anyone who has read Allan Bloom’s `80’s classic, The Closing of the American Mind, students were more sheepish about whether any moral criticism of music is possible.  Plato, who invokes hierarchy, has no trouble in arguing that music which stimulates desire or spiritedness to the detriment of reason is dangerous to the republic.  Professor Krom played some of Bruckner’s 8th Symphony as an example of music Plato would approve.

Concluding with a tie-in to Warhol, Dr. Krom argued that perhaps there is now music which Plato would struggle to comprehend: music which seeks transcendence beyond the simply rational.  Like Warhol, Dr. Krom is a Byzantine Catholic and he noted that in Byzantine liturgy only voice is permitted.  He concluded with this remarkable music video: