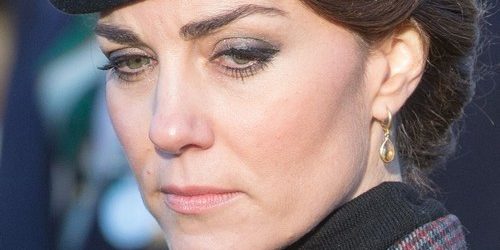 An alternative title to this post could be: Why Tim Gunn is right and the fashion designers wrong.

The next few posts will compare and contrast the theories of beauty by the Third Earl of Shaftesbury, Anthony Ashley Cooper, and Adam Smith. More about them in a moment.

In an extremely interesting article  a London plastic surgeon speaks about the Beautiful Face, a composite of the requests he gets from clients. The chin most desired by his clients belongs to Selina Gomez and the eyes to Keira Knightley. The nose: the Duchess of Cambridge. About that famous nose, the surgeon, Dr. Julian Da Silva, says: the nose is “mathematically almost perfect.” Her nose has something the surgeon describes as a “106 degree tip rotation,” a geometry which research has confirmed most people find most attractive in a nose.

Adam Smith frequently talks about actions as comely, becoming, proportionate. Speaking of the unity of emotion that roots the positive moral judgement of an act, he writes: “upon the suitableness or unsuitableness, upon the proportion or disproportion, which the affection seems to bear to the cause or object which excites it, depends the propriety or impropriety, the decency or ungracefulness of the consequent action” (TMS, 67). Striking is the ease with which Smith blends aesthetics and morals.

In this, he was influenced by Anthony Ashley Cooper. Lord Shaftesbury writes: “there is a power in numbers, harmony, proportion and beauty of every kind, which naturally captivates the heart and raises the imagination to an opinion or conceit of something majestic and divine” (Characteristics of Men, Manners, Opinions, Times [Cambridge: Cambridge University Press, 2003]). Kolnai makes the same point: “Children, though compelled to obey, are kings because they are enticed away, enchanted, into the fairyland of idealized mankind, into the innocent sphere of pure mathematics, into the abstract and leisurely world of eternal forms” (The War Against the West [London: Victor Gollancz, 1938], p. 318).

Tim Gunn has recently chastised fashion designers for ignoring the desire of plus-size women to look fashionable. Indeed, it isn’t really a matter of ignoring, as, in his experience, designers have contempt for fuller figured women (

Gunn argues that since fashion is about proportion and illusion crafted by geometry there is no technical reason why designers cannot make large women look good. Shaftesbury and Smith think this true: beauty is about numbers, and our London plastic surgeon above agrees.

Contempt is a moral judgement and Gunn is not wrong. A case in point is Hamish Bowles. Bowles is a compelling eccentric but also part of the fashion Establishment and his comments towards the end of this short video are typical of what Gunn is speaking about: http://video.vogue.com/watch/vintage-bowles-the-dresses-of-charles-james-in-chicago.

In a week or so I’ll post on Adam Smith’s theory of beauty and how it helps with Tim Gunn’s criticism.