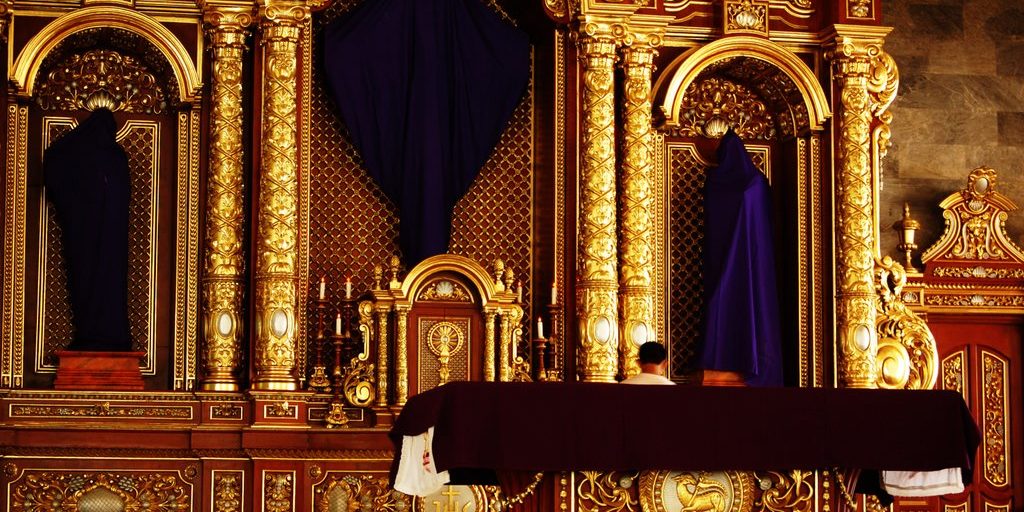 Over the coming weeks I want to do a few posts on the use philosophers make of the idea of cloth in their thinking. I will do a post on Edmund Burke soon but for now I want to mark Easter by using Erich Przywara – discussed at V&R Chapter 8 – to explain a practice still found in some Catholic churches during Holy Week.

No Catholic can seriously argue today that Catholic liturgy is inspiring. Of course, there are exceptions and without doubt the Vatican still puts on quite a show. The dreary fact for most Western Catholics (at least) is that the liturgy offered up in most parishes is unappetizing.

Mount Calvary – an Anglican church in Baltimore city in communion with the Holy See – is a delightful exception. This week the church has its crosses and statues of the saints veiled by violet cloth.

This Catholic practice began in the seventeenth century though no one is quite sure why. There are various suggestions, one including the idea that in Christ’s suffering His divinity was obscured so it is fitting to hide images of Christ and the cross as the Church ritually reenacts that suffering.

In my opinion the Jesuit Erich Przywara is Catholicism’s most important philosopher-theologian of the twentieth century.

His Analogia Entis (1932/1962) is a monumental and profound work of combative Catholic theory. He regularly uses the image of fabric and veiling.

Przywara is especially worried by the human tendency to pacify God, to think of God as something like an unproblematic close friend. He makes clear that there is no warrant for such an idea Scripturally or philosophically and indeed, rather the reverse. Many Biblical texts – and not only the Book of Job – speak of an uncanny god, a god who allots fate and leads souls into and out of the underworld (in the magnificent Betz translation of the Analogia Entis, see pp. 413-14, 496, and 547-48).

Whenever Przywara speaks of God as uncanny he also speaks of God behind a curtain or peering through a “gentle veil,” lest humankind respond to God for the wrong reasons. In Holy Week, God is at his most uncanny, the Father exposing the Son to the malice of demons and men. Perhaps cloth veiling crosses is a matter of discretion, a way for the Church to shield us from God’s most awful incomprehensibility: “he who became accursed is the blessing of God” (p. 548).