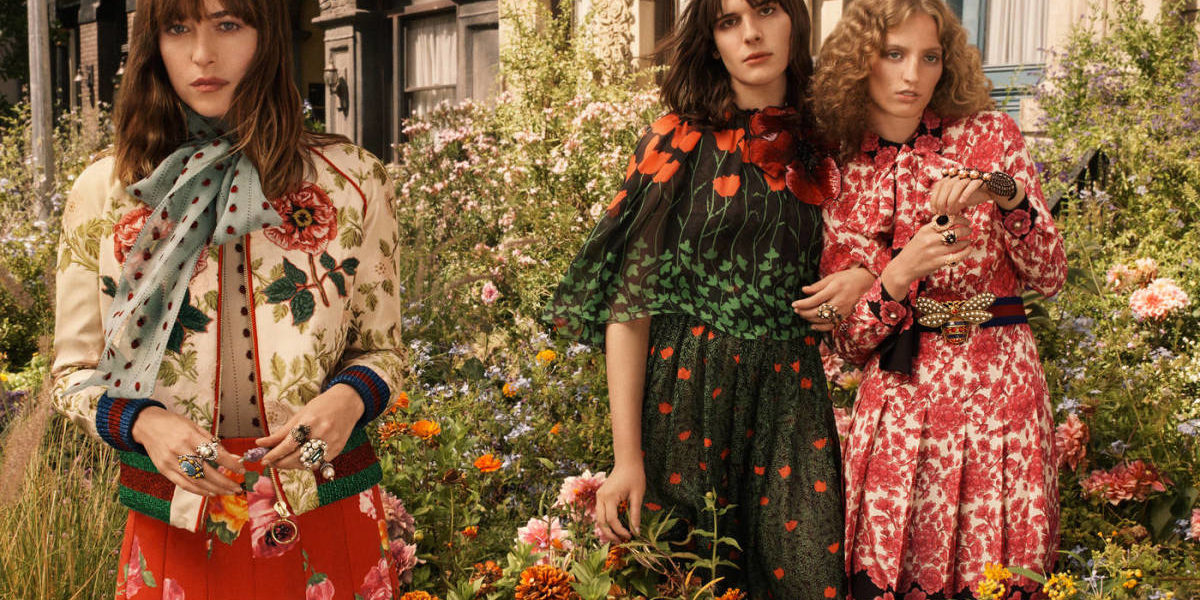 Gucci’s coffers are filling most handsomely these days.  The company had lost its way and was suffering from over exposure and brand population of its own making.  Enter Alessandro Michele and his love of flowers.  He is extremely interesting, as is the relationship between fashion and flowers.

In a prior post, I looked into the connection between flowers and fashion, which is tricky to understand (http://www.ethicsoffashion.com/flowers-fashion-like/).  A recent article, and Michele himself, come to misadventure on the uncertain shoals of the connection (http://www.telegraph.co.uk/luxury/womens-style/still-happy-child-guccis-alessandro-michele-explains-midas-touch/).  Bizarrely, the journalist seems to think that Michele’s clothes celebrate unbounded sexuality — not heterosexuality but blurred sexual boundaries — when the overwhelming impression of his clothes is modesty: just look at the ad above for Gucci’s new scent, Bloom, never mind an item like this:

According to the once conservative British newspaper The Daily Telegraph, Michele’s fascination with flowers also helps explain both the unboundedness of his clothes and sexuality itself.  The article is worth reading because of the quotes from Michele but flowers ill-suit Michele’s basic question — “Why do we have to decide to be in just one place, just one shape, just one state of mind?”  The top notes of Gucci’s new fragrance Bloom relies on the scent of tuberose.

The great eighteenth century Scottish philosopher, Thomas Reid, happens to use the scent of the tuberose as an example to develop his epistemological thesis that sensations are value tones which intuitively deliver true cognitions of the extra-mental world.  We read Thomas Reid today and grasp his point precisely because the scent of the tuberose has not changed in the intervening double century.  Not only is the sent of the tuberose resistant to change over time I also assume Gucci has carefully assessed which smells translate overseas and across diverse markets.  If the scent of this plant is ill-suited to the Chinese and Japanese nose you can write-off the sales now.

As the dress above communicates, the decorative is not necessarily about fluidity and anarchical change, and nor is epistemology, sexuality, values, or sales.