The anarchist who loves a pope 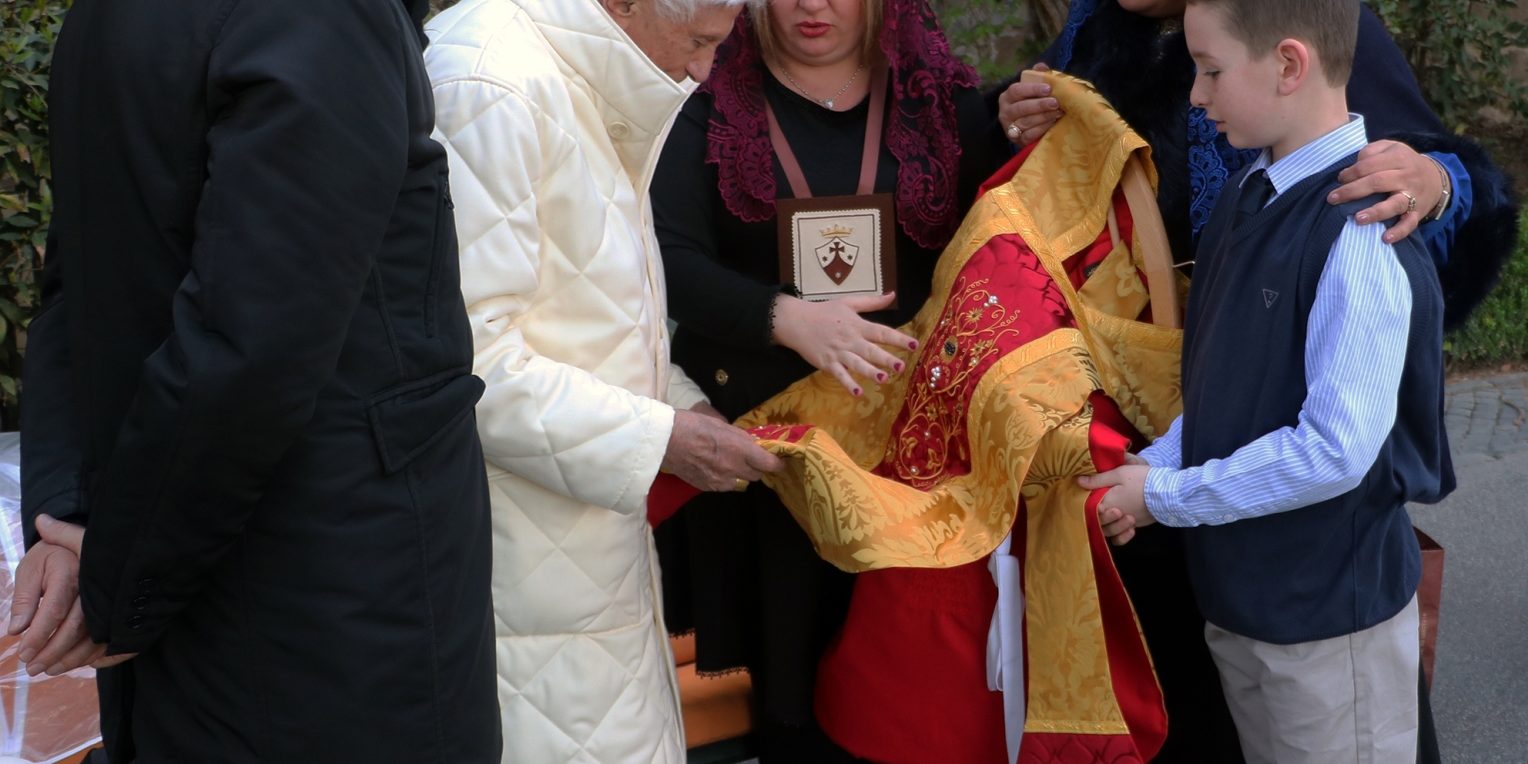 Readers of V&R know that the anarchist Agamben, the Jesuit Przywara, and the “fashionable” pope Benedict are important touchstones for thinking about the moral and political significance of fashion.

Taking up Plato’s skepticism towards fashion, Agamben believes that fashion is one cause of the crisis in Western democracy. We are in thrall to the spectacle of fashion, so he is worried about the way that power plays “dress-up.” V&R Chapter 8 discusses at length the “choreography of power” and Agamben’s effort to develop a critical science of “acclamations, ceremonies, liturgies, and insignia.” Agamben argues that the imagistic character of contemporary politics – which suspends democracy – takes for its model the liturgy of the Catholic Mass. On this account, fashion cannot play a role of subversion; it is always the Establishment perverting democracy.

It is for this reason he is so interested in Pope Benedict. Athleisure wear is not for Benedict! But in Agamben’s eyes, Benedict has suddenly moved from villain to hero. His new book, The Mystery of Evil: Benedict XVI and the End of Days (Stanford, 2017), celebrates Benedict’s desire to overcome the crisis of the West.

Agamben sees Benedict’s abdication as an act of political theology. His argument is that the Pope Emeritus has accepted the basic correctness of an ancient theological claim that the Church is dual in character. A difficult to understand passage from St. Paul speaks of a mystery of iniquity holding back the final coming of Christ. The passage is from 2 Thessalonians and seems to say that this mystery of evil is lodged in the Church itself.

Some early theologians were persuaded of this, and now so is Benedict, claims Agamben. The Mystery of Evil is a very short book – it’s really just an essay – and argues that Benedict’s intellectual life is bookended by an interest in the ancient theologian, Tyconius. In particular, Benedict is struck by his claim that the Church has a bipartite body, one part fusca and one decora. The “dark” (fusca) part of the Church corresponds to St. Paul’s mystery of iniquity. It is this part that actually holds back the Second Coming and the cleansing of the world. In what way is the Church “dark”? Its constant meddling in temporal politics: the Church subverts the good that can come from politics by interjecting its own ideas into what this politic good should like.

In this account, Benedict’s abdication is a purely spiritual act that rebukes the Church for her temporal concerns. It was, if you like, the pope performing an exorcism of the demon part of the Church.

And this is where Przywara comes in. All of Agamben’s work (please see my four part blog entry http://www.ethicsoffashion.com/ontology-of-clothes-i/) has the same logical character: he is interested in contradiction, paradox, heteronomy, dialectic, equivocity, and conflict. His interpretation of Benedict’s abdication expresses this same logic. The end times, the Apocalypse, fascinates the anarchist for this reason. Tyconius believed that in the Apocalypse the bipartite body would break apart, the decora separating and sloughing off the fusca.

It is true that Benedict is far more influenced by the Church Fathers than by the high scholasticism of Thomas Aquinas but it is worth recalling that whatever the end times are like they will be in continuity with now. For, as Aquinas so deftly put it, grace perfects, and does not destroy, nature. This is why Przywara thinks of Thomas as the great defender of the essential content of Catholicism, the analogia entis. The analogia entis argues that there is a degree of similarity that runs between God and creature.

The problem begins with Tyconius’s bipartite construction of the Church: it immediately posits a conflict, a sort of civil war, internal to the Church. If this is your starting point then, of course, there has to be some final dust-up to resolve the issue. It is a typical example of what Przywara calls equivocity, a manner of thinking that puts distance between the divine (decora) and the chaos and carnage of things not divine (fusca). This logic overstates the isolation of God from the world. God, to the contrary, is an intimate of the world He created (analogia entis).

And now back to fashion. There is an inconsistency in Agamben. He is keen to translate decora as justice (the papacy abdicating!) but it is obvious from the word that it relates to decoration. Decora means comely, beautiful, ornamental: in other words, the “fashionable pope” Benedict.

To be consistent, Agamben should claim that the Church through and through is rotten (fusca and decora malevolent) for otherwise the “dress-up” pope so fond of high liturgy cuts against his overarching thesis on the pernicious influence of liturgy in stoking the thralldom of fashion.

To give Agamben credit, he at least has a theory about why Benedict did something so enigmatic and peculiar that it had not been seen for 700 years. Nonetheless, the theory is logically suspect, nor is it consistent for Agamben to celebrate.